Press enter to begin your search

There are two big stories in the personal transport news these days, Uber (and of course its compatriots in the ride-sharing space like Lyft) & Driverless cars. Each is in itself quite an amazing proposition.

Let’s start with Uber. On the surface it looks like a win-win for both sides; the passenger and the driver. For the passenger it’s an exceedingly easy service to use providing a known fare value, easy payment and potentially reduced prices for otherwise expensive taxi travel. On the driver side it “democratises” (I really dislike that term!) the ability for people to hire out their time and vehicles to make a few extra dollars. With a spiralling house market in my current home of Auckland, New Zealand – many people are looking for opportunities like this to make some extra income on the side.

Uber is the epitome of a successful start-up with a great product, quirky brand and “insane” levels of investment. All the talk I hear are on those 3 topics but Uber is much, much more – onto that in a second.

On the other news in transportation, driverless cars have in only a few short years changed from a quirky (maybe sometime in the future) idea to something that is now being commercialised today. Driverless cars are on the roads in at least California and parts of Europe (and probably more) and their numbers will only increase. Legislation allowing their use will change swiftly with an intrigued public and powerful and well financed (previously well financed by government bailouts in some cases recently!) auto companies.

The concept is great. Jump in your car, tell it where you want to go and relax. It will almost certainly be safer at driving than you are and feel free to drink to your heart’s content beforehand (perhaps the transport authorities and police who fight & campaign against drink driving will submit their support for driverless car legislation for just this reason!).

Before I speak about these two technologies together I just want to expand on Uber. One of the areas of Uber’s service and vision which is rarely discussed are their “side” products. From Uber fresh food delivery to Uber same day couriers – a lot is happening in terms of their product development. One of these is a multi-user ridesharing service called UberPool – the one I think is going to be the most transformative. UberPool allows multiple Uber users going to similar places to share a single ride, thus splitting the cost. For a little less convenience in the form of no longer having a backseat to yourself, a 2 minute detour and the potential for obnoxious comrades of travel, you suddenly see anywhere up to a 50% reduction in your Uber ride fee. And that is of a fee that is already way cheaper than your local taxi.
Is that becoming public transport fare territory?

The Combination – The World Changes

It’s quite obvious that Uber’s goal, despite the media focus on the murderers, rapists and kidnappers that form the Uber driver diaspora, is to merge the concept of driverless cars and a taxi service. Cutting out the driver instantly cuts out a big chunk of the cost of an Uber fare, removes the media and authorities fight against illegal Uber drivers and means each car can be used for much longer each day.

Uber is investing, quietly and heavily, in driverless cars.
When this comes to UberPool this is when your daily commute, your travel around town or potentially every journey by road that you take changes.

With a big reduction in the fare with the sharing of a vehicle (split 3 way for 3 people) and the reduction in cost without the driver, you get an “almost” A to B service that is the same price or maybe only slightly more than public transport; and without the hassle of parking AND (this is the best part for me) being able to work or of course play games on your phone while you travel.
Obviously adoption rate is key and it will take time to build to that as people won’t abandon their cars overnight. Without high levels of adoption, the cost sharing aspect won’t be as great but as long as you can get one other to share a ride that is a big reduction and the higher the occupancy rate, the cheaper it gets.

Imagine it, when you are ready to leave for your morning commute, you press a button on your smartphone and in 1 minute one of countless vehicles travelling past stops to pick you up and will take you directly to the steps of your office. All for not much more than the bus and a heap cheaper than driving (and parking) your own car.

Costs will change at the different times of day, where you going in consideration of those around you etc. Uber’s algorithms already handle all of this. Perhaps you may “change cars” part way along the way to save on the price. You can choose the level of service you want and the artificial intelligence powering Uber determines this all seamlessly and real time for you and the millions of others in your city in the background.
The only question I have about this is a people one – would people feel comfortable sharing a small vehicle to get around together? Let’s look at some places that embrace this idea: 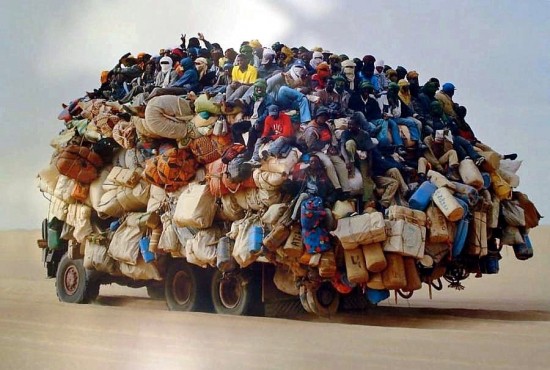 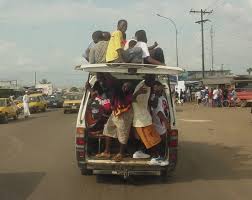 For our decedent and individualistic Western society, perhaps manufacturers will be quick to build “private cubicle cars”. Perhaps you pay more for that particular vehicle type?

While this is the likely direction the world of transport is going in the medium term, I don’t know how it will happen. The reality is that to provide a service that is timely and low cost, economies of scale in terms of vehicles and service utilisation rates within a town or city have to be high. And unless $2,000 Tata Nanos rule the automotive world, that isn’t cheap (and still isn’t, even with Nanos!). Let’s look at some figures of what this may look like.
In my current home of Auckland we have a population of 1.5 million people. Let’s say that we needed 100,000 vehicles to cover the movements of that population every day. And each driverless car costs an average of $30,000.
100,000 cars x 30,000/car
= $3,000,000,000 ($3 billion) capital cost for vehicles
Now that is a capital cost of $3,000 per inhabitant per city in terms of fleet costs. Let’s say that the service is applicable to 4 billion people worldwide. The capital cost in vehicles alone is $12 trillion! Apple’s reserves of $160 billion are only just over 1% of that!
No matter how much cash Uber has, and the crazy heights Silicon Valley investments go to, it can’t fund that.

So how does this come into fruition? The answer will most likely be for regional or city players to build the capital base required to purchase the fleets for their cities. Uber will license their ride sharing and route determination technology and partner with driverless car manufacturers to build those fleets.

The future of transportation is more about Uber and driverless cars – it’s about what both bring when they come together. Now anyone seen those drones becoming suspiciously capable to be “hover cars”….?